(see the handout for more info).

In addition to enjoying a wonderful array or dishes, we reflected back on our journey, shared our experiences and floated ideas for next year. And Suzi shared her insights on how to prepare the garden for the cold season.

This is the time to test your soil. No need to do every year but good to do if you’ve never done it before. Two good sources are Logan Labs and Cornell University (they both include instructions for sample collection, preparation and shipping). A professional test will measure pH and also tell you about what nutrients may be low in your soil. Most soils get acidic over time and is usually a good bet that they’ll be in need of lime, which breaks down slowly and usually only needs to be applied every 2 or 3 years.

If you still have crops growing (at this point mostly greens), it’s important to protect them from early frost if you want to extend their life for a few more weeks. If there’s a chance of frost, you may want to cover them with a special fabric.

When your annuals are done, don’t pull them out—cut the above-ground portion and leave the roots intact. If the plants are not diseased, you can chop them and leave them on the ground as mulch. If not, cover with mulch (e.g., leaves or straw).

Do uproot any perennial weeds if you don’t want them coming back.

You can still plant garlic. Hard neck variety is best than soft neck for this area.

You can also plant overwintering crop seeds such as kale, lettuce and spinach. They may germinate now, which is great. If not, they may germinate in spring. Worst-case scenario, the seeds will rot, but it’s worth a shot at having greens very early next season! The key is to mulch several inches. Then in March or April, pull out the mulch in stages to avoid a temperature shock (first pull out all but one inch and a week or so later take the last inch).

When your garden is done, make sure it’s mulched in some way, for example with chopped leaves (make sure they are chopped and not whole!), or wheat cloth (a type of tarp).

September 15, 2016: Preparing for the End of the Season + Applesauce Making

Other things to try in the garden:

There are two basic ways of making applesauce:

A few things to keep in mind when preserving:


For additional info, please see the handouts on pests and natural spray recipes.


We held the class outside at the Kitchen Garden. Suzi provided useful information and answered questions about pests and problems encountered by gardeners. In addition, she showed us how to prune tomato plants.


Some highlights about pests:

Get the handout for additional info.

We started the class in the garden and Suzi gave us tons of tips, advice, and practical demonstrations. Here are some of the highlights:

Get the handout for additional info and make sure to check out the companion planting guide, which will tell you which plants and flowers promote or inhibit growth of various crops and/or which pests they deter.

We started at the Kitchen Garden, where Suzi shared lots of info and many useful tips.
We then moved indoors for the rest of the class where Suzi provided additional info and answered questions. Here are some of the things we talked about:

We started this third session with some planning basics, including sun requirements (if gardening area gets less than 6 h of sun daily, you can still grow that require less sun such as beans, lettuce and arugula), ideal bed orientation, etc (see handout). If you use raised beds, ideally you want a soil depth of at least 8 inches.

Suzi explained the importance of rotation to avoid diseases that run within plant families. In particular, if you plant nightshades (tomato, pepper, eggplant, potato), cucurbits (cukes, melons, squash, zucchini), or brassica (cabbage, kale, broccoli, etc.), make sure to plant something from a different family the next season.

Seeds.
Other useful info and tips we learned about:

We started this second session by sharing where and what we grow or would like to grow. Then we delved into the topic of the day: soils--it's not just a growing medium; what happens in the soil affects plants.

1. Soil composition. Soils are made of four components, ideally in this proportion: about 45% minerals (weathered rocks), 50% porous space that can be filled with air or water, and 5% organic matter. Organic matter is derived from things that are or used to be alive, like roots, leaves, manure, etc. These things break down until they reach a stable form called humus.

2. Soil Texture. Determines how the soil hangs together and it’s determined by the size of its mineral particles. Sand particles are the coarsest and helps create breathing space while silt is much smaller. Clay is microscopic and negatively charged, so it plays a key role attracting nutrients that will be later absorbed by plants. The “ideal” gardening soil is called loam, made of roughly 30-40% sand and silt, 20-30% clay, and 5-10% organic matter. Normally you cannot change soil texture, but adding organic matter helps. Soils in the Northeast are relatively young and are usually sandy loams, which is pretty much what we want.

3. Soil pH. Stands for potential of hydrogen and is a measure of acidity. 7 is neutral, lower values are acidic and higher are alkaline. For most plants & vegetables we want pH between 6 and 7. This is a very important soil property because it determines whether nutrients will be available to plants (too high or too low pHs can lock certain nutrients in the soil, making it impossible for plants to absorb them). There are inexpensive and easy tests to measure pH.

4. Soil Biology. The soil web of life is essential for plants to thrive. E.g., nitrogen-fixing bacteria (that live in legume roots) take nitrogen gas from the air (which is abundant but unavailable to plants) and transform it into soluble forms that plants can plants absorb. This is also a much more efficient way to get nitrogen to plants; if we apply inorganic fertilizer, it’s like a sugar rush, which negatively affects the plant (and the environment, as it requires huge amounts of fossil fuels, among other negative impacts). Other bacteria, fungi and protozoa that live in the root zone will extract nutrients from soil minerals and make them available to plants. Soil life can be increased by adding compost and growing cover crops. Unlike what has been “conventional wisdom” until recently, it is important to disturb the soil as little as possible so as not to disrupt this web of life and the structure they help create. Tilling or turning the soil will break roots and fungi filaments, and will move organisms to areas of the soil where they cannot live (e.g., surface bacteria moved deep into the soil and vice-versa). No-till is best, use broad fork for aeration. In the spring it’s also very important NOT to work the soil until it’s dry enough.

We then talked about what we can start doing now—start seeds inside using seed starter (not potting soil, which is too heavy). In addition to seed sources mentioned in January, other good ones are Fedco, High Mowing, and Kitawanza Chef Gardens (for unusual/fancy edibles). We talked about seed types. Heirlooms tend to be flavorful but difficult to grow. Hybrids can have advantages like disease resistance but you cannot save seed (offspring will be totally different). Open-pollinated seeds will give something similar to the parent plant. Go for what you like; e.g., when you find something tasty at the farmers market, ask what it is. When choosing tomatoes, determinant varieties will produce all fruit at about the same time, which is good for preserving (you want to do it once in the season). Non-determinant varieties will fruit throughout the summer, which is good if you want to use them continuously.

January 21, 2016: Partnering with Nature in the Garden

Get session one handout.

This was the kickoff of the 2016 series of gardening classes. It was a very lively gathering, attended by around 25 people. We shared our experiences and desires for gardening and heard about Roots & Wings' vision for expanding availability of community garden plots, as well as some potential opportunities.

Then Suzi talked about the issues with "conventional" or industrial agriculture; the importance, benefits and limitations of organic agriculture; and how growing some of our own veggies is even safer. Participants shared their own approach to providing healthy food for us and our families.

A few interesting facts:
We also discussed how we will be getting ready to garden and what will be covered in future classes. Specifically, in January, we can start thinking about the types of veggies (and/or flowers & other plants) we would like to grow. This is the time to obtain seed catalogs (Johnny's Seeds, Hudson Valley Seed Bank, and Park Seed are some good ones). It's also a good time to learn more and read gardening books. Some suggested literature includes The New Organic Grower by Elliot Coleman and How to Grow More Vegetables by John Jeavons.

2015 - The Kitchen Garden through the Year

As we start putting the garden to bed, now is the time to test the soil and add any needed amendments so the soil is in good shape at the start of the next growing season. A professional soil test is the best tool to determine if you're lacking any nutrients and how much you would have to add. At a minimum, you should test the soil pH, which can be easily done with affordable and easy-to-use commercially available kits.

Welcome! Rivertowns Community Gardens is a project of Roots & Wings. 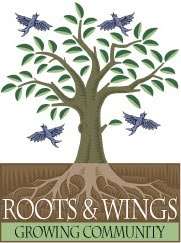 We look for ways to support sustainability--from growing food to powering down--practicing lifestyle shifts like reusable dishes, onsite composting, bike/walk initiatives, local food potlucks, simple living, connection and community. We are not experts—we are learning by doing. Each step of the process is open to all and we will be offering seasonal presentations by people who are further on the path of "people care, earth care and fair share." Join us!